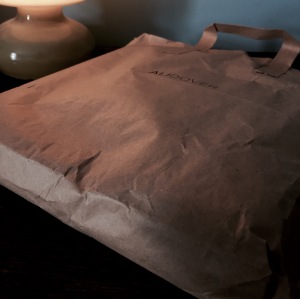 I’ve never owned an Ali Dover. I have tried and loved several but don’t have one to call my own (yet). On release day I tried for Sweet for my amazing friend while others tried to get a Steel for our library. We were all unsuccessful. When I managed to grab one of the cancellations on Monday I was as excited as if I had scored for myself! Never mind the adrenaline rush of a fastest fingers release, this had my heart beating even more. Knowing there was only 2. Knowing that I wouldn’t be the only one with notifications switched on. I was shaking when the success message came up!

Then the wait for it to arrive. It wasn’t long, less than a week, but it felt as long as the last few weeks of pregnancy. Or like waiting for Christmas Day. Basically a lifetime! I was upstairs folding laundry when it arrived. My husband called up “I think a wrap is here” Thundering paws down the stairs, I snatched it from him and told him I needed time to open this one!! As I write I am thinking how ridiculous this must sound, especially as this wasn’t even for me! It’s just a piece of fabric right? (Obviously we all know that’s not the case. No matter the wrap or the company it came from it’s never just a piece of fabric).

I took the brown paper package upstairs and cleared the top of my bedside cabinet ready for photographs. Inside I found a small brown paper bag and inside that Steel. An Ali Dover luggage label held in place with a string bow. Perfect in its simplicity.

And then the three stripes. The three monochrome stripes. The beautiful thick dark grey stripe perfectly just off centre. So far this wrap was made for me.

I quickly decided that the dark wood was not right for this wrap beyond this initial surface exploration so moved to the clean white and dusky grey of the nursery and continued my journey.

After obsessing over the string and luggage tag for several (possibly too many!) photographs I was finally ready to untie and then noticed the sneaky slither of orange tempting me in. 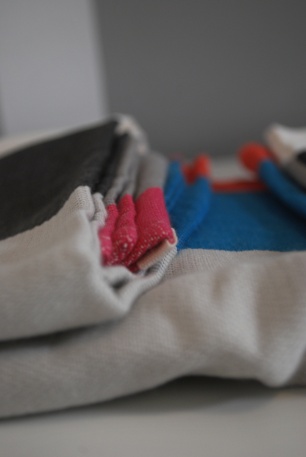 Unfolding revealed more waves of coloured stripes, the bold tones beautifully complimenting the greys and creams. I had seen lots of spam but I wasn’t prepared for how amazing it would be in real life.

It seems silly to get so excited about opening a wrap. Surely the memories are made with the wearing of it? A beautiful package doesn’t a good wrap make and a wrap that arrives in a plastic postage bag doesn’t make it sub standard. But it’s the small, thoughtful and personal touches that stick.

Was the wrap meant to be revealed this way? Did Ali fold each wrap the same with the reveal in mind? Maybe this was the only one folded this way, maybe they all are but my expectations and the hype surrounding the brand has changed my experience of it? Who knows? Who cares?

So the wrap is revealed. Now to photograph the crap out of it!

It’s impossible to take a bad photo of this wrap. Folded, rolled, thrown in a heap on the floor. I thought I did’t like stripes but Ali Dover stripes are not normal stripes and Steel’s stripes are just wow!

Remembering that this is a wrap for the library with punters ready to hire it, I put it in the wash and hung it to dry on my mums long washing line. And there was Steel in all it’s glory, described by someone as an Ali Dover flag.

Like I said, I don’t own an Ali Dover but I’m a fan. I see the effort and thought that goes in to her process, the ethics that her company is built on and this shows in the way this wrap looks and the way it wraps (I did eventually wrap with it!). What an amazing experience!