After experiencing some cramps at about 7 weeks and being a very nervous person (and incredibly impatient) we decided to go for a private scan at 8 weeks.  As the sonographer swept across my stomach and showed us our beautiful baby with it’s amazing heart beat me and Saul turned to each other with cliched tears in our eyes and shared a moment. Look what we had made, how amazing! 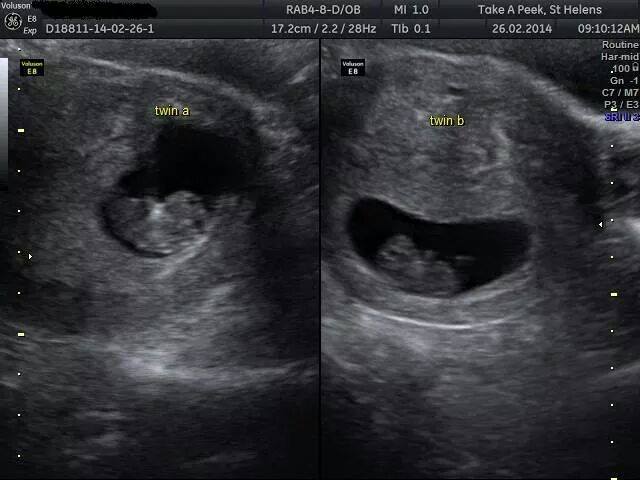 My tiny “twin a and twin b.” I was hit by instant panic and 8 million thoughts about how we couldn’t afford twins, how I wouldn’t be able to cope with twins. My happy tears turned in to panicked tears. Not unhappy. I was still over the moon. But now I was also panicked. Where would we fit two babies? We would have to move, we would have to decorate before we put the house on the market, Oh My God…..packing! How would I ever be able to leave the house again with two babies in tow?  Did I mention the panic?!

As my pregnancy progressed and I got more used to the idea of two babies, we filled our house (that we decided not to sell) full of twin stuff including a giant Bugaboo Donkey pushchair. This thing was enormous! It wouldn’t fit through the front door, and there was no way it was going to fit in the boot of my beloved Fiat 500 (I now drive a Vauxhall Zafira FYI!). Along with every other clueless soon to be first time mother I had my checklist of “must haves.” I also had a pregnant Sister in Law who was 4 months further in to her journey than me. She told me about the Close Caboo she had bought so of course I went out and bought two of them. I didn’t really know why I was buying them.

Then in what seemed like the blink of an eye I had two babies! Saul took four weeks off and we went out with our giant buggy. It did’t fit through the door of the local cafe but we forced ourselves in and were welcomed like old friends.

Then one day at a lovely group at The Vine Cafe (said local cafe) one of the mums showed me how to use the Caboo. After 3 weeks the carriers had just sat in their boxes unused. I think it was Matilda that had first go. They were easy going babies in general but when I put her in the Caboo she rested her head on me and fell asleep. A week later it was Henry’s turn. I had gone home after my first go and told a skeptical Saul how amazing it was. He was sceptical! I had tried a few times in the week, one attempt fairly successful, one not so much! So with Michelle’s help I tried again. Head down, fast asleep and a closeness that made my heart skip a beat, just like the week before with Matilda. Again I headed home elated. This time Saul was less skeptical.

So we decided to head out and about and give the caboos their first public outing. A vintage fair, in an old Victorian Warehouse, not easily accessible for a double buggy. We were not however ready to go buggy free so we lugged it up the stairs. After a mooch we sat down for coffee and cake and decided we were brave enough to give it a go. 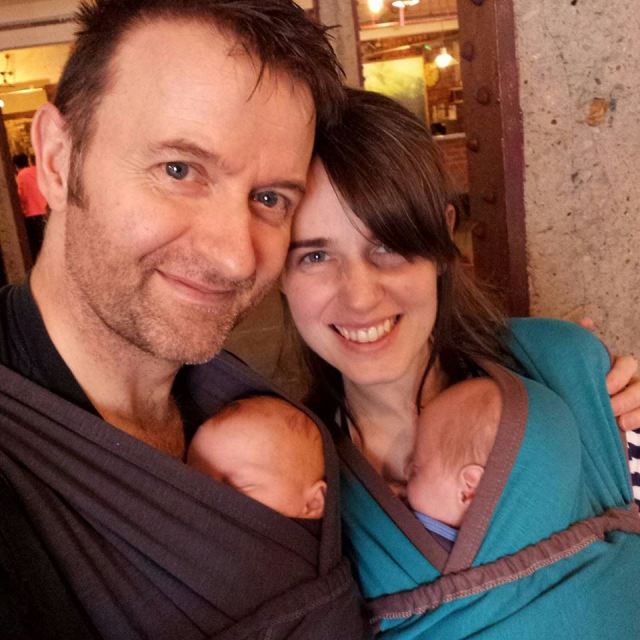 That was the moment we became baby wearers. We didn’t look back. There were bumps in the road (turned out I didn’t like the Caboo so got a Beco) but I wouldn’t have coped without carrying the twins. I never managed to carry both at once when they were tiny but when I was alone and needed it it saved my sanity several times. It made going out alone manageable and made going out as a family easy and enjoyable. We went to the Christmas Markets every weekend! 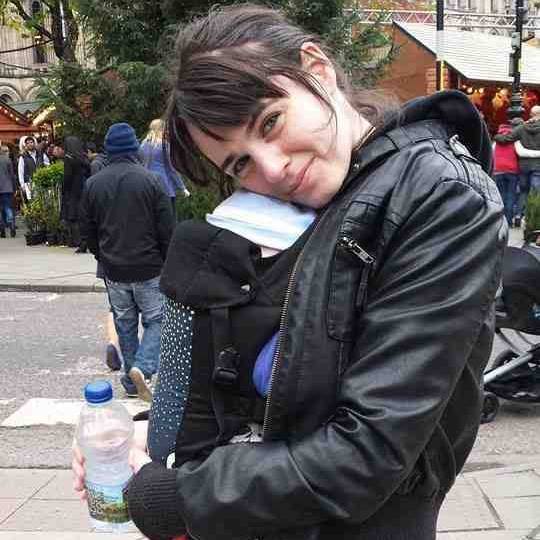 What baby wearing gave me was a freedom I never thought I would have. It gave me the confidence to venture beyond the 4 walls of my living room and then beyond the safety of my neighbourhood. What baby wearing means to me now, 2 years later…… well that’s for another post.